On April 28th, the Atelier Europe had the opportunity to meet Zoltán Cséfalvay, who is the Hungarian minister in charge of competitiveness within Viktor Orban’s government. After a brief introduction to present his missions, he tackled two major issues for Hungary: the budget imbalances and the competitiveness challenge. 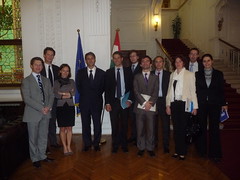 Regarding budget imbalances, Zoltán Cséfalvay told us that Hungary is currently facing a formidable challenge cutting its deficit to the government’s targets. The government expects the deficit will decline to 2.5% of GDP in 2012 and 1.9% by 2014, thanks to a series of savings measures outlined in its “Szell Kalman” – named after a 19th century finance minister – reform plan and its euro convergence plan.
Indeed, back in 2008, Hungary needed IMF-European Union financial help after the global economic crisis occurred to avoid bankruptcy. But, Zoltan Csefalvay explained that Orban’s new government, which came into power in 2010, soon broke with the IMF and the Fidesz government immediately launched a package of fiscal reforms to keep the budget deficit in check.
The measures include cutting the eligibility period for unemployment benefits, tightening disability pension rules, and abolishing early retirement to cut spending and keep the deficit below the 3% of GDP ceiling of the European Union.
Prime Minister Viktor Orban’s government also introduced a flat 16% personal income tax this year and promised to create hundreds of thousands of jobs in coming years to put the economy back on a path of sustainable growth.
After this decision, the government regained some investor confidence with plans to revamp its budget. And, according to your host, Hungary has been able to make a benchmark issue on the bond market, that has been highly appreciate by investors.

The second part of the discussion focused on the link between competitiveness and innovation. According to Zoltán Cséfalvay, the current currency crisis in Europe is hiding the real problem: competitiveness.
He explained that some centuries ago, Europe was benefiting from a significant growth rate mainly due to the competition of different economical models within European countries. Some won, others lost, but diversity was a key to higher growth. Europe was successful because it experimented different economical and social models.
Nowadays, with a single currency shared by countries in different situations, Europe is in a “corridor”. How to finance R&D with such public spending debt?

“Would venture capital be a solution? ” asked Zoltán Cséfalvay. “Banks have to finance innovation” advised our host.